How to use: Ability Checks

A common complaint about 5e D&D is that the "skill system stinks." Specifically, that the lack of tables of pre-set Difficulty Classes (DCs) and examples produce too much variance between tables. In my experience, most of that is due to DMs not reading the relevant material or applying an older edition's philosophy to 5e.

REPEAT AFTER ME: 5e D&D is a new game entirely. NONE of the specific mechanics carry over. They may be modeled on the old mechanics, but they're new and done for different reasons. Both the nature of skill (really ability) checks has changed as well as the philosophy of when to force a roll.

This article will attempt to provide a little more clarity and some useful tools. All of this comes from the DMG and PHB.

Let's tackle them from easiest to hardest. When I say "make a roll", I mean "roll 1d20 and add relevant modifiers." Except for contested checks, ties go to the one making the roll.

Attack rolls represent hostile actions where it makes sense to talk about the effect missing or being absorbed, ablated, or deflected by cover or by armor. Any use of weapons to cause hit point damage uses an attack roll unless it says otherwise. Some spells (mostly those involving projectiles, rays, or physical contact with an opponent) require attack rolls--those specifically say in the spell description. To resolve an attack roll, the initiator makes a roll against the target's armor class (including bonuses from cover if present).

Saving throws represent hostile actions that cannot miss but may be resisted partially or completely by the target. Armor is irrelevant here. Cover matters only in the case of Dexterity saving throws. To resolve an ability that calls for a saving throw, the defender makes a roll against the effect's DC (set by the spell-caster or initiator as prescribed in the ability).

Ability checks represent actions by characters that are non-hostile, contested, or otherwise don't fit either of the above types. Most of the time, ability checks are called for in response to a player trying to interact with the world around them. Compared to saving throws, they're generally more actively initiated by the player. Nevertheless, only the DM can call for an ability check. Players say what they want the character to try, the DM sets a resolution method that might involve a check. There are three types of resolutions for ability checks:

What modifiers do I add (plus philosophy)?

From here on out I will limit myself to discussing ability checks.

Ability checks always involve one of the six ability scores (more precisely the ability modifier). Which modifier should you use? Whatever the DM decides to call for. What should the DM call for? That depends on how the character is approaching the problem. An example is escaping from bonds (such as ropes, chains, or manacles): To break the bonds you might make a Strength check. To slip/wiggle out of them might require a Dexterity check.

Note the word might in both cases. Most things that characters attempt just happen with no check required. Characters should be presumed to be competent at all basic adventuring tasks--checks should only be called for things where there is a meaningful chance of failure and where the consequences of failure would be interesting. Ability checks should move the micro-story along one way or another. If the only consequence of failure is having to spend the time to retry (and time isn't critically important), players should automatically succeed if the task is possible. Tasks that have trivial difficulty should not even require checks. Tasks that are impossible (e.g. "I want to jump to the moon") just don't happen--no check needed.

What about skills? I've been talking only about ability checks, not "skill checks." That's because there is no such thing as a skill check in 5e D&D. There are only ability checks that may (or may not) involve a skill, tool, or other proficiency. If, as the DM, you believe that the task is one where training and practice could improve your results, see if it fits into one of the skills described below (taken from the PHB). If it does, make it an Ability (Skill) check--this means that if the character has proficiency in the indicated skill, they can add their proficiency bonus to the relevant ability score. Skills normally are associated with specific abilities, but the DM can decide that the particular approach called for should rely on a different ability (e.g. a strong-man performance (lifting weights, showing off musculature, etc) might be a STR (Performance) check instead of a CHA (Performance) check). As a DM, don't be afraid of straight-up ability checks however. They're probably just as common as Ability (Skill) checks.

This is the hard part (but it's not too hard). Here's a flow-chart to help: 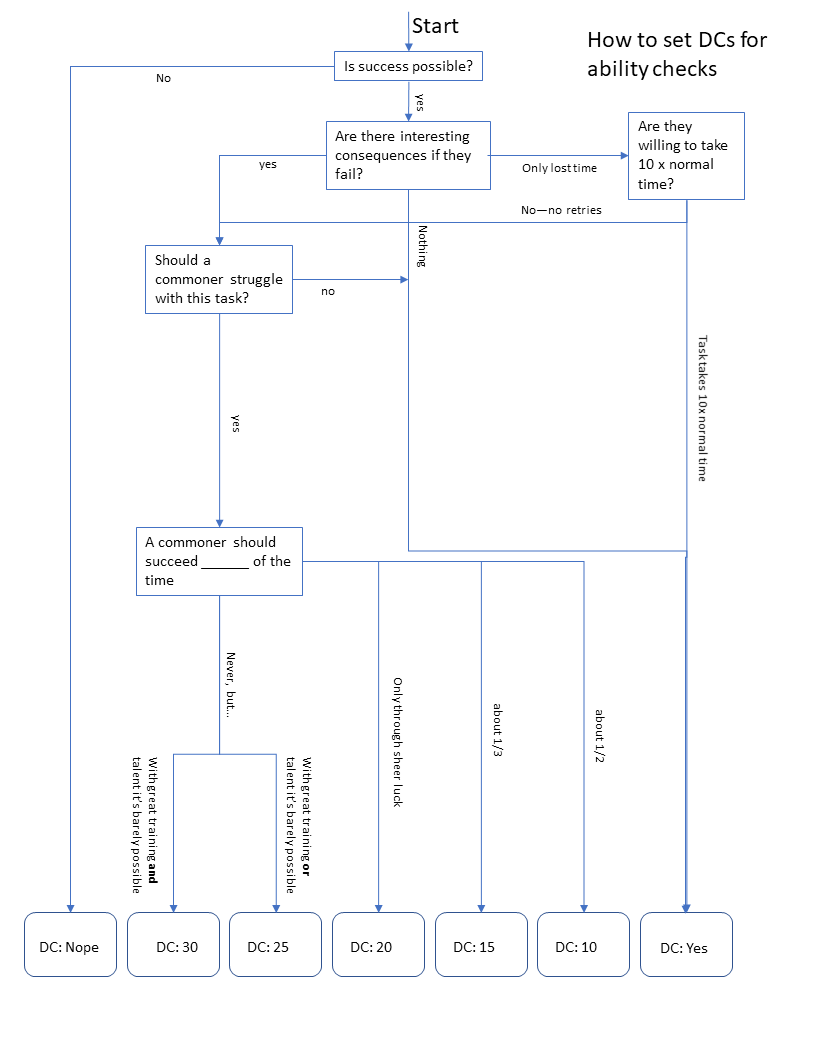 What are each of the ability checks and skills used for?

This is a rare ability check. Most uses of this ability score are probably saving throws.

This skill covers all sorts of putting together clues. Wisdom (Perception) tells you what is there, Intelligence (Investigation) tells you why it's there. Discovering trap mechanisms, solving puzzles, and doing research in old tomes all fall under this skill.

Perception is your ability to receive and understand sensory information. It's used to spot/hear/smell/etc. things that might be hard to detect, hidden, or obscured. It only tells you what, not why. Perception tells you there's a wire stretched across the hallway--Investigation tells you it's probably connected to an alarm.

Performance is how good you are at pleasing audiences through singing, telling stories, playing instruments, juggling, feats of strength, etc.

Like Deception and Intimidation, persuasion is about gaining influence. Persuasion is the good-graces, polite, good-faith negotiating version. If you're honest about your offerings, use persuasion. This also covers etiquette and polite social skills.